Brisbane, Australia (CNN)Election day creates a carnival atmosphere at polling booths across Australia, but beneath the bonhomie lies a serious decision — and Saturday’s vote has the potential to usher in major change.

Prime Minister Scott Morrison is asking voters to re-elect his center-right Liberal-National coalition government, after a three-year term dominated by the pandemic, climate disasters, and accusations of dishonesty.
Morrison’s popularity has waned since he defied polls to clinch a “miracle” win over Labor in 2019, and this election is seen as a referendum on his self-confessed “bulldozer” leadership style.
SUPORT: DR.STRANGE 2
–DR STRANGE MOVIE
:DR.STRANGE 123Movies Online
Morrison’s main rival is Anthony Albanese, a Labor Party veteran who inherited the party leadership after his shell-shocked predecessor stepped down following the 2019 election loss.
This time Labor has stripped back its policy offerings to narrow the difference between it and the coalition, though both are facing an unprecedented challenge from “teal” Independents, who are campaigning for more climate action and political integrity.
Backed by the millionaire founder of “Climate 200,” the color teal blends their “blue” Liberal views with “green” beliefs.
The major parties need at least 76 seats to govern outright — any less and they’ll have to negotiate with smaller parties and Independents to secure enough support to form a minority government.
Voting is compulsory and more than 17 million Australians are expected to have cast their vote before polling centers close at 6 p.m. AET (4.00 a.m. ET) on Saturday.
If there’s a clear winner, the outcome could be known within hours — but a close race may take days or even weeks to resolve. 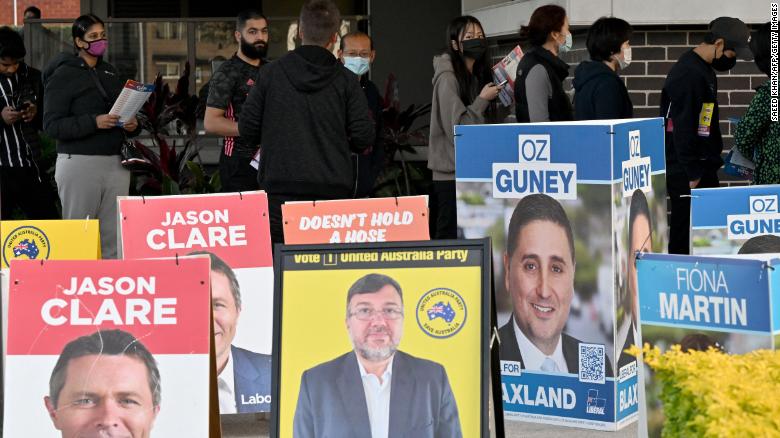 Voters queue up outside a pre-polling station in Berala electorate of Sydney on May 19.

Across the country, smoke wafts from barbecues at polling sites as volunteers cook “democracy sausages” wrapped in a slice of bread topped with onions and sauce — a decades-old Australian election tradition.
Volunteers wearing party colors hover nearby, waiting to push “how-to-vote” cards into the hands of anyone they suspect could be undecided.
After leading the polls for weeks, the odds narrowed for a Labor win in the final days before the vote, though public surveys are being approached with caution after the 2019 upset. Then, even bookmakers were caught off guard with SportsBet reportedly losing more than $5 million after paying out a Labor win two days early.
Australian elections are typically a two-horse race between the Liberal-National coalition and the Labor Party — and while their policies seem similar, they are some important distinctions. 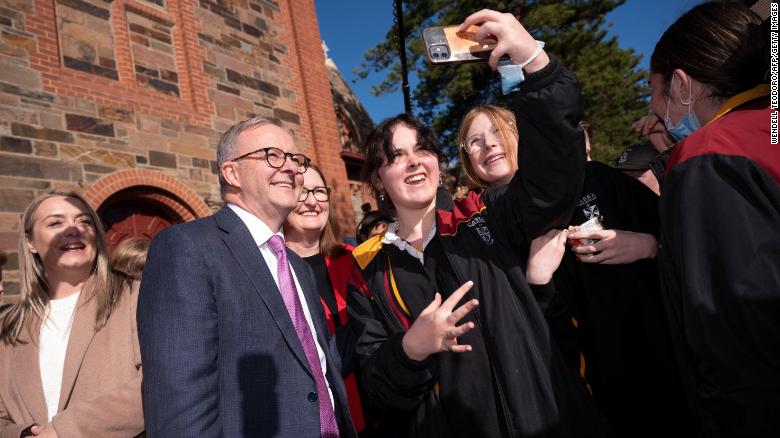 Opposition Labor Party leader Anthony Albanese poses with students from Cobra Dominican College in Adelaide on May 20.
The most globally significant is their stance on the climate crisis.
The Morrison government has been called a climate “holdout” by the United Nations Secretary-General after outlining a plan to get to net zero by 2050 by creating massive new gas projects. The government says it backs a transition from coal to renewable energy, but has no plans to stop new coal projects. 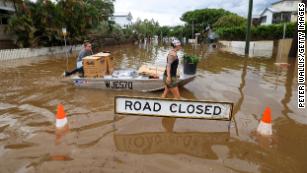 The ‘lucky country’ is facing a crucial test. The result will affect us all
Labor says it will cut emissions by 43% by 2030 — higher than the coalition’s target of 26-28%, but less than climate scientists say is needed to keep global temperature rise within 1.5 degrees Celsius, as agreed under the Paris Accord. Climate-focused Independents want emission cuts closer to 60% by 2030 and to disrupt cozy relations between government and the mining industry.
Not much separates the major parties on foreign policy, though Labor says it will rebuild relationships it accuses the coalition of damaging during its term. That includes the French, who Morrison angered by canceling a $90 billion submarine deal in favor of the AUKUS security pact with the United States and the United Kingom. Both the coalition and Labor have vowed to be tough on China, which signed a security deal with the Solomon Islands during the election campaign, leading to claims Canberra had dropped the ball in the Pacific.
Other issues dominating the election include housing affordability, inflation and the cost of living, which aren’t unique to Australia. Morrison says only the coalition can be trusted to manage an economy bruised by the pandemic amid predictions that rising interest rates could inflict more financial pain on over-extended home owners. Meanwhile Labor says it’s the only party who’ll stick up for workers whose wages have stagnated even as inflation rises to a 20-year high. 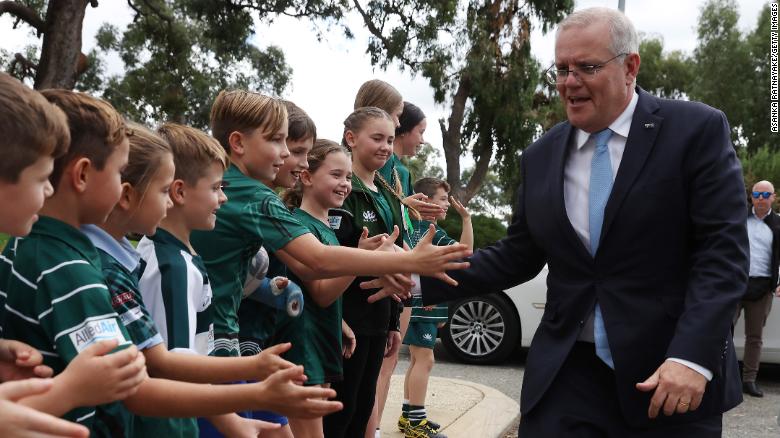 Why Morrison could go

Morrison stumbled just a few months into his leadership when he made the politically disastrous decision to go on holiday to Hawaii as bushfires tore through the country. He cut his holiday short after two volunteer firefighters died but justified his absence to a radio interviewer with a phrase that has become shorthand for buck-passing: “I don’t hold a hose, mate.”
Months later, when the first case of Covid was found in Australia, Morrison was quick to act. He shut the nation’s borders for two years but was criticized for failing to quickly roll out vaccinations, which critics allege allowed local outbreaks to take hold, forcing major cities to lock down for months. To date, just over 8,000 people have died in Australia from Covid, and around 50,000 new cases are being reported each day. 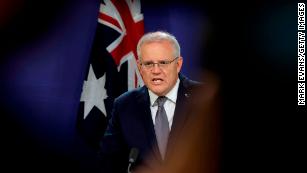 Opinion: How Australia’s ‘mate-ocracy’ created a toxic Parliament
The Prime Minister has also been attacked for his lack of empathy when dealing with a Liberal staffer who alleged she was raped in parliament, prompting a mass rally in 2021 by Australian women who called on the government to do better. During the pandemic, women’s groups criticized the government’s readiness to rebuild “hard-hat” industries dominated by men, while neglecting sectors that largely employ women — hospitality, the arts — that suffered from extended shutdowns.
Insults have been hurled throughout the election campaign, with Morrison labeling Albanese a “loose unit” after the Labor leader said he’d “absolutely” support a wage rise to keep up with inflation. Morrison turned the mirror back on himself when he admitted during a news conference he could a bit of a “bulldozer” — then vowed he would change. The election result may reveal whether voters believe him.
The big unknown in this election is whether voters will turn their backs on the major parties to vote for smaller parties or Independents. Most of the teal Independents are highly educated women who have turned to politics are becoming frustrated with 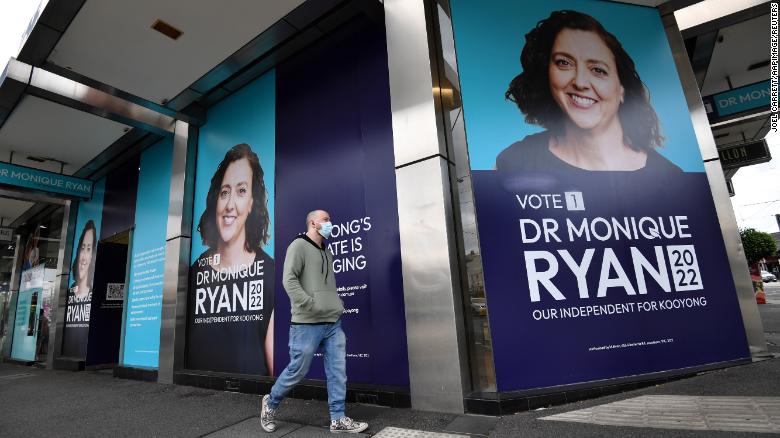 Campaign posters for Independent candidate Monique Ryan in the seat of Kooyong in Melbourne.
Hanabeth Luke nominated as an independent in the electorate of Page in northern New South Wales after hearing Deputy Prime Minister Barnaby Joyce say the government couldn’t cut greenhouse emissions because it would hurt farmers.
“I was enraged,” said Luke, a scientist who teaches climate resilience at Southern Cross University. At the time she was marking students’ assignments about their lived experience of climate change. “Students had me in tears. We’re talking about crops dying in the fields, and then fires burning the crops, and then a flood washing the fields away,” she said.
“The rage that I felt then led me to go, ‘right there’s an election coming up. We can’t allow this government another three years to allow our children’s future to burn.'”
Polling on the Independents is mixed, but Zareh Ghazarian, politics lecturer at Monash University, says some could cause “real damage” to the Liberal Party.
One of the most influential battles is taking place in the Victorian seat of Kooyong, where Monique Ryan, a children’s pediatric neurologist and political newcomer, is seeking to displace Liberal treasurer Josh Frydenberg, who’s considered a future Liberal Party leader.
“If (Independents) were to win their seats, not only does it make the job for the Liberal Party harder to maintain government, but it will also deprive them of potential leadership options in the future,” Ghazarian said. “So it’s a big stakes issue for the coalition.”