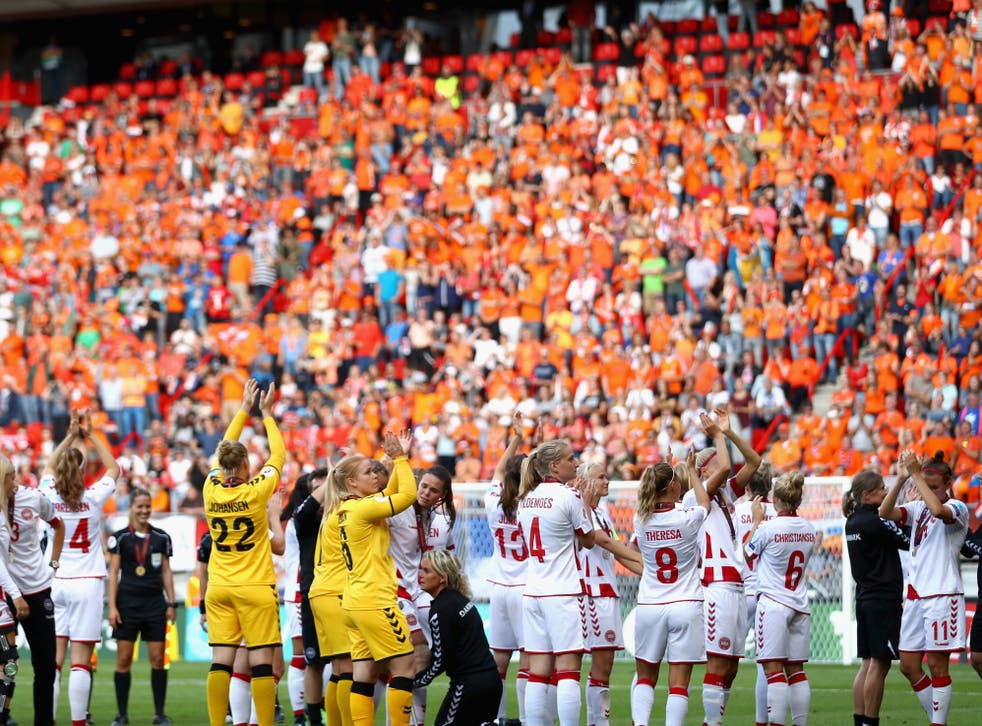 Women’s Euro 2022: Record-breaking crowds, the favorites and which players to watch
Euro 2022 looks set to be the crescendo for a record-breaking wave of support for women’s football in Europe this season.

Around 450,000 tickets have already been sold for the 16-team tournament — including a sellout 73,200 for England’s opener against Austria at Old Trafford and 87,200 for the Wembley final — far exceeding the previous record of 240,000 set in the Netherlands four years ago.
The hype around the tournament follows on from a season that saw numerous attendance records broken across the continent.
In Spain, Barcelona set a new world record attendance figure for a women’s game as 91,648 packed a sold out Camp Nou for the first leg of its Champions League semifinal against Wolfsburg, breaking a record that had stood since the 1999 Women’s World Cup final.
There were also records broken in France, where 43,254 fans turned up at the Parc des Princes to watch Paris Saint-Germain’s Champions League semifinal against Lyon, while England also saw its club attendance record broken as 49,094 saw Chelsea beat Manchester City in the FA Cup final at Wembley.
Excitement for the start of the Euro 2022 is palpable in Sweden, too, where a record 33,218 turned out to watch the national team beat Brazil in its final warmup game.
This season has proved, beyond doubt, that a huge appetite for women’s football exists across Europe.
For that reason, there has been some consternation around UEFA’s decision to use stadiums, such as the Manchester City Academy Stadium and Leigh Sports Village, that some players and fans consider too small for such a major tournament.
Euro 2022 favorites
England
Host nation England comes into Euro 2022 with a realistic chance of winning the first major trophy in the national team’s history.
Home advantage in front of a record-breaking English crowd will no doubt play its part, but the team has been hugely impressive under head coach Sarina Wiegman since her appointment in September 2021.
England remains unbeaten under the Dutchwoman, who guided the Netherlands to glory at the championship four years ago. Under Wiegman, England has scored a remarkable 84 goals, including a record-breaking 20-0 win over Latvia, and conceding just three.
The Lionesses continued their impressive buildup to the tournament with an eye-catching 5-1 win over Wiegman’s former team, before going on to beat Switzerland 4-0.
A team boasting the talents of forward Lauren Hemp, striker Ellen White and defender Lucy Bronze can compete with the very best, but the overriding question is whether this group can cope with the weight of expectation.
The national team has reached the semifinals in each of the last three major tournaments, but fallen short of reaching the final every time.
This iteration of the side is arguably the most talented of them all and, after the men’s team reached the Euro 2020 final last year, England fans are understandably optimistic about seeing their national team in a Wembley final for the second summer running.
Jill Scott celebrates after scoring England’s fourth goal during its win over Switzerland.
Spain
While the bookmakers have Spain going into the tournament as the narrow favorite, it is perhaps more accurate to view this team as the favorite among the dark horses.
The team laid down a marker with an impressive 7-0 rout of slightly understrength Australia in its penultimate warmup game ahead of the tournament, before drawing 1-1 against Italy on Friday.
In Ballon d’Or winner Alexia Putellas, Spain boasts arguably the most gifted player in the world and someone who is able to single-handedly win a match with a moment of individual genius.
Spain’s rise on the international stage has coincided with Barcelona becoming a domestic and European powerhouse over the past couple of seasons, and no less than nine Barcelona players have made it into Jorge Vilda’s final 23-player squad.

This team can sometimes struggle to break down the defenses of stronger or more stubborn teams and it will be hindered further by the absence of record goalscorer Jennifer Hermoso, who suffered knee ligament damage earlier this month.
There was also considerable surprise among fans of the Spanish national team with the omission of Real Sociedad duo Amaiur Sarriegi and Nerea Eizagirre, who scored a combined 33 goals in the Primera last season, with Sarriegi also netting 11 goals in five World Cup qualifiers.
Despite Spain’s deficiencies, however, there will be few teams relishing the prospect of facing Vilda’s side.
Players to watch
Alexia Putellas
Spanish superstar Putellas is arguably the name to watch at this summer’s Euros.
The 28-year-old, winner of the 2021 Ballon d’Or, led Barcelona to an all-conquering season in Spain as the team secured the domestic treble and narrowly missed out on winning a second consecutive Champions League title, though she did finish as the top scorer in this season’s competition.
Both a clinical goalscorer and a world-class creator, Putellas is the record appearance holder for the Spanish women’s national team and against Italy on Friday became the first woman to reach a century of caps.
The midfielder is one of a number of technically gifted players this Spain team boasts and Putellas will be the orchestrator that allows the likes of Aitana Bonmatí and Athenea del Castillo to thrive going forward.
Alexia Putellas celebrates after scoring the equalizer against Italy.
Ada Hegerberg
Opposition defenders beware: Ada Hegerberg is back. The 26-year-old only returned to Norway’s national team in April after a five-year absence.
After finishing as runner-up at Euro 2013, Norway went into the tournament in the Netherlands five years ago with high hopes.
However, the team finished bottom of its group and Hegerberg subsequently quit the national team setup, saying her experiences with the side left her “mentally broken” and frustrated with the way women’s football was regarded in Norway.
Hegerberg continued to excel at club level for Lyon and her form led her to being crowned the winner of the inaugural women’s Ballon d’Or in 2018.
But in January 2020, Hegerberg ruptured her anterior cruciate ligament, which sidelined her for almost two years.
When she returned in October 2021, she hit the ground running and helped Lyon reclaim the French league title it had lost to Paris Saint-Germain the previous season. She also notched a goal and an assist in the Champions League final to wrestle the crown back from Barcelona.
One of the most lethal goalscorers in the women’s game — her prowess in front of goal epitomized by a hat-trick in her first game back for Norway after five years — Hegerberg will be gunning to make up for lost time on the international stage.

The reason for this is Blue World Trade Center Is so well-known!

THE IMPORTANCE OF AN MOT IN THE UK